Aiju Grain and Oil Industry Group Co, a grain and oil group in Xi'an International Trade and Logistics (ITL) Park resumed production on Jan 28 -- in order to ensure the supply of grain and oils, staple foods and market supplies.

Locals can buy them at supermarkets and Aijiu stores.

"We have strengthened our connection with the commercial supermarket, opened up a fast track channel and direct supplies by the company to ensure the supply," said Liu Dongmeng, deputy general manager of Aiju Grain and Oil Industry Group Co. 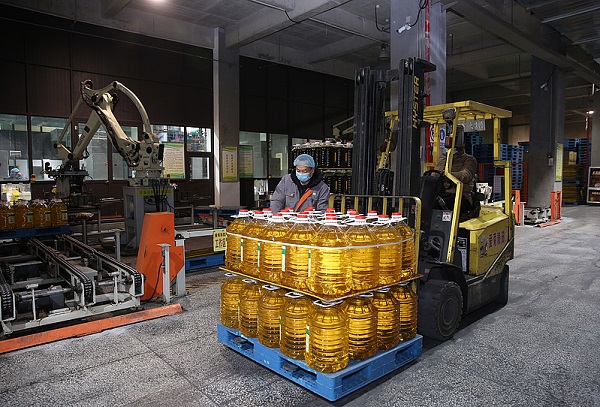 In addition, the company opened four major processing bases in Xi'an, Xinjiang and Kazakhstan, which were shut down due to the Spring Festival.

These are now running at full speed to replenish finished products and the grain inventory.

While ensuring production, the company has also adopted stringent control measures in epidemic prevention and control. All personnel entering the factory must have their temperature measured and they must wear masks and register their identity.